The last match of the 2021 season saw the young York side take on the Leeds side at the immaculate Fulford GC with the sun beating down and the boys in fine spirits after a win in their last match against Teesside Union.

For the first time this season, Captain Andy Robson need not field any debutants and with 3 Past Presidents watching on (Andy Holmes, Neil Bellamy and Martin Greaves) and President Mike Ward doing starter’s duties it was game on against a Leeds team of youthfull big-hitters.

The morning foursomes was hard going for the front 9, with only 1 match up, 2 heavily down and the rest in the balance. To get any lead going into the afternoon, there was much reliance on matches 3 and 6 where both pairs of George Robson and Ciaran Matthews (Fulford) , Matty Dolling and Wayne Strutt (York & The Oaks) headed for the 18th tee just 1 up, 1 to play. Thankfully, each match secured the 18th hole win to increase the margin to 2 up. Oaks pair, Tom Pyman and Harry Lee once again won as did Malton & Norton’s Tom Brown and Jack Boyd. Unfortunately, it was an early and long lunch break for James Cass and Marcus Brigham (Fulford & M&N) and Rob Hutton and Tom Kelly (Fulford) who couldn’t recover from being heavily down.

With an 8-4 lead at lunch and 2 points per match for a win, there wasn't much room to drop points through the afternoon. Fueled by some home-made Rocky-Road chocolate bars, the team pushed on throughout the course and eventually only suffered 3 defeats in the afternoon to win 25-11.

Captain Robson had special thanks again to the anchor roles in matches 11 and 12. Once again, Matty Dolling had come straight from Sandburns greenkeeper team after a 4am start and Wayne Strutt came straight from finishing a night shift for 36 holes in soaring temperatures.

The win meant York finished 7th in the league, tied on points with Harrogate but with a poorer points margin differential.  However, if the last two matches are anything to go by, the future is bright for this young York side. 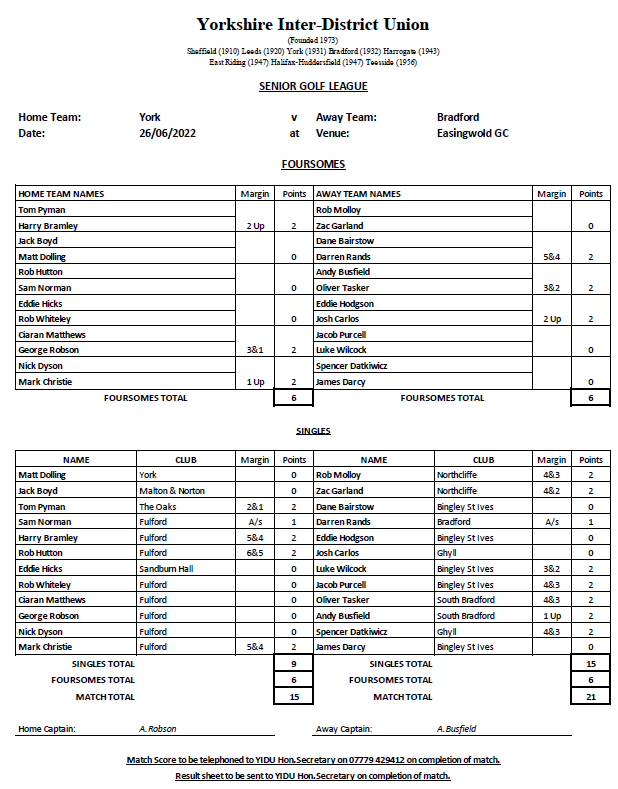